The man behind the name, Martyn Bassett! To celebrate our 20 years, here are 20 things you probably don't know about our CEO:

1. Martyn grew up in a village in England, called Rotherham. He moved to Canada when he was 9 years old and has lived here ever since.

2. He is a big destination skier. He loves to ski in the mountains of BC with his family. Kicking Horse, Fernie, and Whistler are a few of his favourite spots.

3. We all need a little pick me up here and there so occasionally Martyn enjoys his Burgundy wines. Tawse Winery in Niagara peninsula and Burrowing Owl Estate Winery in BC are some of his favourite wineries.

4. His pet peeve is his name being spelled “Martin.”

5. He’s an excellent cook. He loves preparing feasts for Easter and Christmas - his seared brussel sprouts with pancetta are the star of the plate. 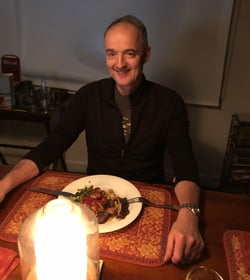 6. You can't be a good cook and not love restaurants. Martyn’s favourite restaurant in Toronto is Alo.

7. He is much more a savory than sweet person.

8. During the summer, he enjoys playing golf. His favourite course is Pebble Beach and is a fan of The Scientist, Bryson Dechambeau.

10. Staying active is important for Martyn so he spends most of his weekends going on hikes with his dog. One of his favourite trails in Toronto is Cedarvale Ravine.

11. Watching films is also one of Martyn‘s pastimes. Every year he watches all the Oscar-nominated movies, but his new favourite is the action/drama movie, Riders of Justice.

12. One of his most memorable experiences was fishing for salmon in the wild waters of the Pacific. He started when he was just 18 and spent 5 summers doing that.

13. Martyn has seen over 1,000 bands live! His most memorable concert was seeing U2 before they rose to fame at the Maple Leaf Ballroom during the 80s. There are a lot more interesting stories from his concert days, so make sure to ask him about them.

14. Martyn’s favourite band of all time is The Clash.

15. That being said, his favourite song is London Calling by The Clash.

16. Martyn loves exploring cities and discovering neighbourhood gems. He would go back to Barcelona in a minute. 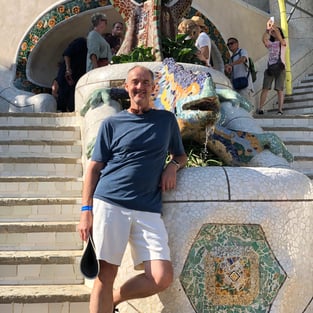 18. He graduated in Biochemistry at McMaster University.

19. His original plan was to go into Medicine but he realized later on that he was not meant to work at a lab.

20. Plan B: Recruiting. Martyn was meant to work with people; connecting them with opportunities and helping companies build great teams.

What Martyn loves most about what he does is to be able to work with talented candidates. He enjoys guiding them through the process and being that partner that helps them seize opportunities. The excitement a candidate gets about a new career opportunity makes everything worthwhile and hearing a candidate’s genuine appreciation for our work is what keeps him going.