3 of the most creative workplaces

“Innovation is the ability to convert ideas into invoices.” – L. Duncan

That is the goal, isn’t it? Knowing what you want – innovation – is the first step toward success. But figuring out what that looks like in the context of your own business is where things tend to get tricky.

You can’t just will yourself (or your employees) to innovate. You need to set the stage for the masterpiece. Award-winning movies and plays aren’t just the result of talented actors and actresses. The set designers, make-up artists, wardrobe stylists and light crew all had a hand in making the finished product as real and believable as possible. The secret to their success is in their preparation – by preparing to put on a masterpiece magic happens. To make magic happen at your workplace, you need to set the stage.

The best part about preparation is that you can start now. It doesn’t require any crazy investments, a relocation or a restructuring. You just need to change the way you’re thinking about innovation. How does innovation happen? That’s an easy one: it happens when you start to look at things differently. Put another way, it happens when you start to get creative! You can be creative without innovation, but you can’t have innovation without creativity.

That’s why so many of the top workplaces in the world have made the shift from the traditional workspace (fluorescent lighting and cloistered cubicles) to more communal, open-source ecosystems. Over the past decade, companies have noticed that if they want to see innovation proliferate in their offices, they need to stop stifling creativity. Rather than relegate creativity to the time after the work day ends, owners and managers are pulling the curtains back in order to let it grow and bloom at work.

Gone are the days when creativity was a type of fungus that thrived in the dark of night – now, the most successful (and innovative) companies are the ones that have found a way to work creativity into their day-to-day doings.

Here are three of the top creative workplaces to draw inspiration from.

Located in the sunny San Fernando Valley out in California, DreamWorks Animation’s studio is a sprawling campus of creativity. While the features that the workspace boasts – like a yoga studio, a fully-stocked kitchen and a beautiful courtyard – are nice bonuses, it’s the company culture that ensures the studio continues to churn out blockbusters. Dan Satterwaithe, the head of human resources, explained the company’s strategy in 2012, pointing out that “true original ideas don’t happen in a conference room or in someone’s office.” Innovation happens in conversations between colleagues in hallways and over coffee in communal spaces. That’s why DreamWorks put so much effort into making sure that their space is cooperative and centered on community: to foster an environment for creativity through conversation.

The DreamWorks campus was specifically designed to inspire DreamWorkers to enjoy, innovate, and create.

This one might seem obvious, but the reason we’re pointing out Google’s offices is because of one thing in particular: colour. Google doesn’t have colourful walls to be eccentric – there are numerous studies that say colour is a huge contributing factor to creativity. For example, scientists say that green sparks inventiveness, red enhances focus and that blue boosts creativity. Take a page out of Google’s book and paint an accent wall a bright colour – and you’ll be sure to reap the benefits. 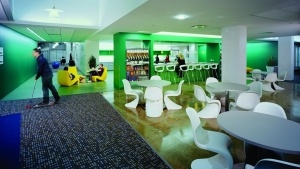 “When you want people to think creatively and push the boundaries of what’s possible, their workspace shouldn’t be a drab maze of beige cubicles.”

When Twitter Canada moved into its new offices on King Street earlier this year, they threw a party to celebrate. They invited everyone to come check out their new abode, and tons of people popped in to tweet about it. Shailesh Rao, Twitter Canada’s vice-president of emerging markets, said the office was designed specifically to promote “innovative inspiration.” With high-top tables between communal desks, “No Devices” areas and meetings held in restaurant style booths, every aspect of this workspace is about getting employees to talk to one another. 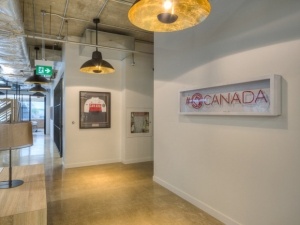 “Innovation is the ability to convert ideas into invoices.” – L. Duncan

Hiring a Product Manager who understands the necessity of creativity in the workplace – and how to let it flourish – is integral to the success strategy of both your product and your company. Learn how to adapt your hiring process to ensure that who you bring on board fits the bill with our free eBook of top industry secrets on how to effectively hire for this crucial role.